In 2007, long before Donald Trump ever even considered politics, Kim Clement prophesied, “Trump shall become a trumpet, says the Lord. I shall raise up the Trump to become a trumpet.” 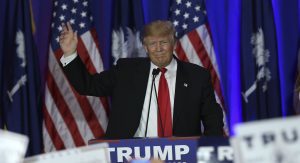 There is a man by the name of Mr. Clark and there is also another man by the name of Donald. You are both watching me, saying could it be that God is speaking to me? Yes, He is! Somebody, just a few minutes before you came on the show, you went out and you took the American flag and you said, “I’m proud of my nation.” You raised it up, and God said, “You have been determined through your prayers to influence this nation.” You’re watching me; you’re an influential person. The Spirit of God says, “Hear the word of the prophet to you as a king, I will open that door that you prayed about and when it comes time for the election, you will be elected.”

I will fool the people, yes I will. God says, the one that is chosen shall go in and they shall say, he has hot blood. For the Spirit God says, yes he may have hot blood, but he will bring the walls of protection on this country in a greater way and the economy of this country shall change rapidly, says the Lord of Hosts. God says, I will put at your helm for two terms a President that will pray but he will not be a praying President when he starts. I will put him in Office and then I will baptize him with the Holy Spirit and My power, says the Lord of Hosts.

A couple of sentences later, the same night, Kim prophesies the following:

PROPHECY ABOUT THE YEAR 2017 and the next administration

I’m feeling like I’m standing in 2017 and things have been disrupted so badly that people are confused because their plans didn’t work. I’m seeing this very strong figure standing in the United States of America saying, now we’ve got to clean up the mess! And they have the skill and the ability to do it. And they’ll say, well the pen has already signed. And I’m hearing this strong figure saying, I don’t care what was signed, we will make the changes. So I want to encourage many of you that are watching that are saying we hear about judgment and we hear about fear. Fear’s been brought upon our nation because of the display of ISIS, the display of the beheadings and the display of the arrogance and all of this – and yet God is doing some stuff that we don’t even know about. That’s what we’re going to find out. And so I got caught up just into the next administration, if you wish, and I didn’t see bad. I saw calmness, I saw peace