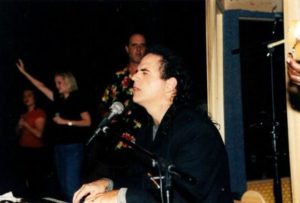 Kim and Jane and their two young children, Donnè and Jacquelyn, moved to the USA. Kim and Jane were closely associated with Pastor Mike Hayes and Covenant Church in Carrollton, TX. In 1992 Kim and Jane established their own ministry called Prophetic Image Expressions. They spent the next few years growing their ministry and travelling all over the USA and Canada to many prominent charismatic churches, and made numerous television appearances on large Christian networks. It was during this time that Kim met and found many talented musicians including Israel Houghton and Ricky Sanchez. Together they established a new prophetic worship “sound”. In 1993, Kim broke both his wrists. While lying in hospital, he experienced a number of visions in which he saw a generation of people that had been lost or had grown weary of religion. This was the beginning a new direction for the ministry called Piercing the Darkness, and the concept of the Warriors of the New Millennium was born.